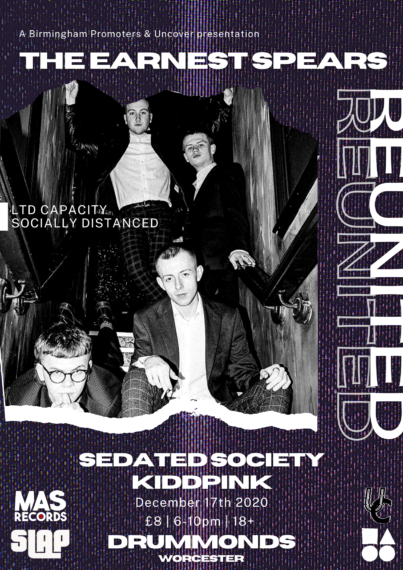 The Earnest Spears with support from Sedated Society and KiDDPiNK

The Earnest Spears are a new wave / post punk band from England, UK. Since forming in March 2019, they have hit many milestones including releasing their debut EP ‘Sincere and Intense Conviction’ as well as supporting bands such as The Wytches and Press Club.

SEDATED SOCIETY are Four compadres railing a new track down the old dusty road of rock and roll. They bleed an expansive combination of stoner rock , blues , grunge , R&B , jazz , shoegaze and pop music.
Gives listeners the feeling of comedown nostalgia and youthful attitude , connecting with youth and adulthood simultaneously .

KiDDPiNK is an alternative punk artist from Worcester, UK.

After starting to release music from his bedroom in August 2019, ‘PiNK has gained a strong following online with his blend of alternative rock, catchy hooks and trap beats.