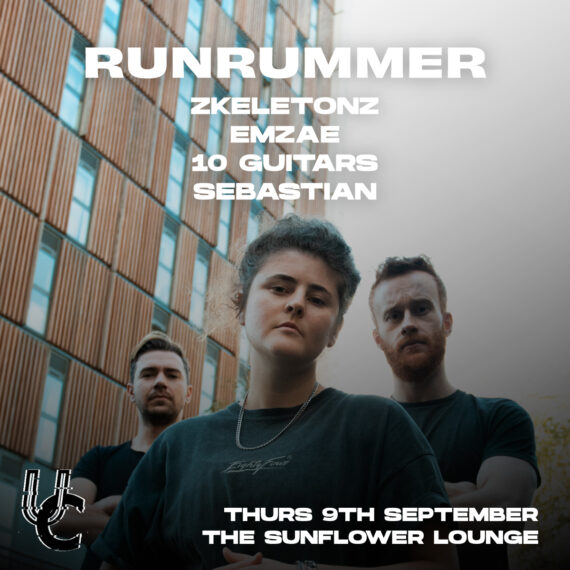 RUNRUMMER
Runrummer is the alias of 25-year-old Livi Morris; a songwriter and producer who grew up around Birmingham and is now based in East London. She’s been praised for creating “effortlessly laid-back melody and lyrics tinged with a swagger found on Lily Allen records” (Gigslutz).

ZKELETONZ
Bedroom producers from the underground embracing the 21st century with playfulness and confidence, Zkeletonz are pioneers of POSTPOP; pop music with a postpunk spirit.

10 GUITARS
10 Guitars is an Electro-Pop artist from Birmingham, England. Having recently played a string of gigs and festivals, 10 Guitars mixes genres such as funk and pop along with house & techno.A sound unique to the 2nd city.

EMZAE
Described as “one of the most interesting up-and-coming artists in the Midlands” (MusicNotts), Derby-based singer-songwriter Emzae is building a loyal following for her unique brand of self-produced electronic pop which has received praise from the likes of BBC Introducing and Transgressive’s Toby L.

SEBASTIAN
Sebastian is a Funk artist from Birmingham, UK, who performs original tracks in the style of the “Minneapolis Sound” – popularised in the ’80s by the likes of Prince, The Time, Sheila E., Vanity 6, and Alexander O’Neal.