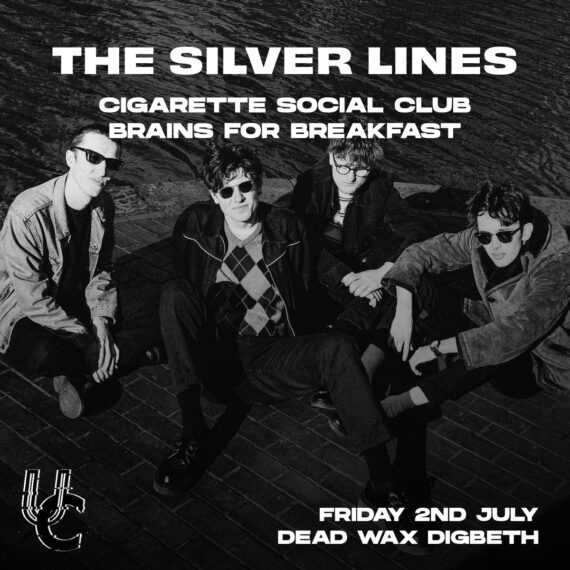 THE SILVER LINES
The Silver Lines are a punk/indie band from Birmingham, West Midlands, They have made waves in the UK’s major cities playing venues such as Manchester’s The Factory, London’s Roadtrip and The Workshop, and Birmingham’s Sunflower Lounge. Recently, they have developed a loyal fan base selling out their hometown gigs and have just returned from playing their first festival in the USA, The New Colossus, NYC (featuring Tim Burgess of the Charlatans). Their singles have been championed by BBC Introducing and have had airplay on BBC Radio 1, BBC Radio 6 Music and Radio X.

CIGARETTE SOCIAL CLUB
Four lads from Stourbridge who met through pure love of music developing their sound and look to find their feet in the thriving Birmingham scene. With influences of early 00’s indie while flavours of the new modern sound, the four lads cigarette social club move forward really looking to make a scene and explode into Birmingham.

BRAINS FOR BREAKFAST
Brains For Breakfast is a solo artist from Walsall, West Midlands. He has been playing shows for over 10 years and has played shows across the UK, Cyprus and in 2019 arranged his own European tour in Germany, Belgium and Switzerland! He has supported/shared stage with acts such as: Mark Morris (The Bluetones) Get Cape Wear Cape Fly, Shane Richie, Dodgy, The Rainbow Girls, Lucy Spraggan to name a few.