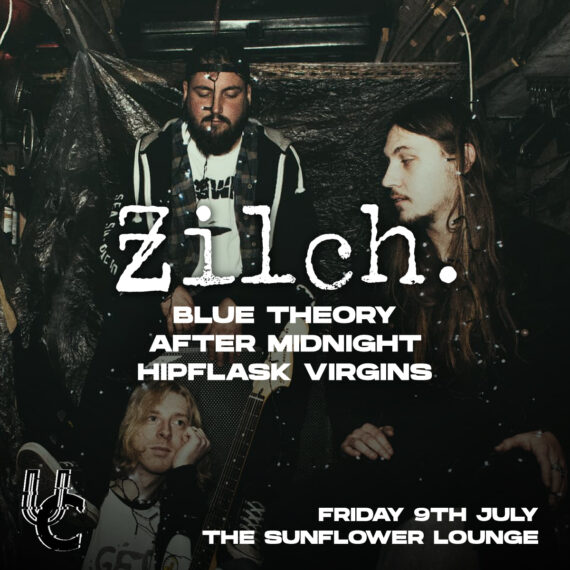 Harnessing melody, groove and positive angst in their songs, Zilch. create a dangerous balance musically, and this carries over to their live shows, known for their raw delivery. Loud and energetic, Zilch. are sure to provide a sonic punch drenched in distortion and sweat.

Blue Theory
Drawing influences from rock, blues, funk – and taking inspiration from artists such as Black Stone Cherry, Sound Garden, Otis Redding, and Paulo Mendonca; they have crafted a set list of riffs that will punch you in the mouth, with a groove that you can’t help bang your head to.

After Midnight
After Midnight are a Birmingham based Alternative rock band which formed in the summer of 2018. The four piece act attempts to recapture the sounds pursued by Alternative music icons of the 90’s such as The Smashing Pumpkins, Nirvana and Green Day. Although they have not been together long the band has already played a numerous set of gigs throughout the Birmingham music scene including the 02 Institute 3 and the Flapper

The Last Rogues
The Last Rogues are a 4-piece rock band, formed in late 2019, in Birmingham, UK. With heavy hitting riffs and a big live sound, their influences range from Foo Fighters, Queens of the Stone Age, and Arctic Monkeys to name a few. The band came together when lead singer Jordan Barnett built up a collection of songs and demos and linked up with lead guitarist Connor Scully.